Home About Me Archives Subscribe Forensic Services
How Far We've Come: Twenty Year of Breast Cancer Treatment.
Why do you have to wait two weeks for immunity to develop after you get your second shot?

Stopping Cancer at the Checkpoint

You may know someone with cancer who is being treated with a new type of drug that is called a checkpoint inhibitor.  These medications are not toxic chemicals, but are antibodies, proteins similar to the ones your body

makes to fight infections.  These include ipilumimab, nivolumab, pemprolizumab, atezolizumab, avelumab, durvalumab, and cemiplimab. These medications have only been available within the last 5 years, but some have shown remarkable results.  Many cancer scientists regard these checkpoint inhibitors as the biggest breakthroughs in cancer treatment in this century!

Checkpoint inhibitors were developed based on years of research on how a person's immune system fights cancer. You may be surprised to learn that your body is always fighting cancer, even when you are in the best of health. Your immune system's white blood cells continuously travel throughout the body to detect and kill cells that don't belong there, whether they are bacterial, viruses, or cancer cells. This immune surveillance prevents many cancers from getting started in your body, while keeping your body from destroying its normal tissues.

How can a white blood cell tell a normal from a malignant cell?  The white cells actually "feel" the surface of the unknown cell to determine if it has normal proteins to which it binds, o 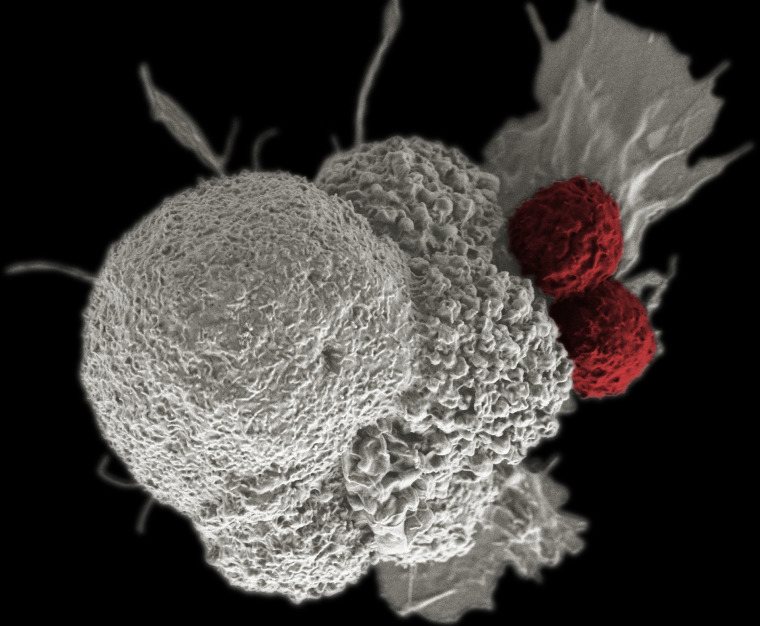 r if the surface proteins are foreign antigens. If a normal cell is contacted, then the killer cell's PD-L protein binds to the normal cells' PD-L1 protein. This binding, which is called "the immune checkpoint," is like a handshake that tells the T-cell it is normal, and to leave it alone. But if the cell feels abnormal, then the killer T-cells are called in to destroy it by binding to it and then killing it. The picture is an actual photo taken by an electron microscope of the killer T-cell, in red, binding to the cancer cell, in gray.

Cancer cells can make use of the PD-L/ PD-L1 handshake to escape immune surveillance so that T-cells do not kill them--even if they are recognized as abnormal cells. They do this by expressing a large amount of PD-L1 on their surface, as shown in the figure below, on the left. Checkpoint inhibitors interrupt this handshake by blocking the binding of PD-L1 or of PD-1, on the right.  Sometimes the results are remarkable as the tumors that are treated are slowly attacked and removed by killer cells. 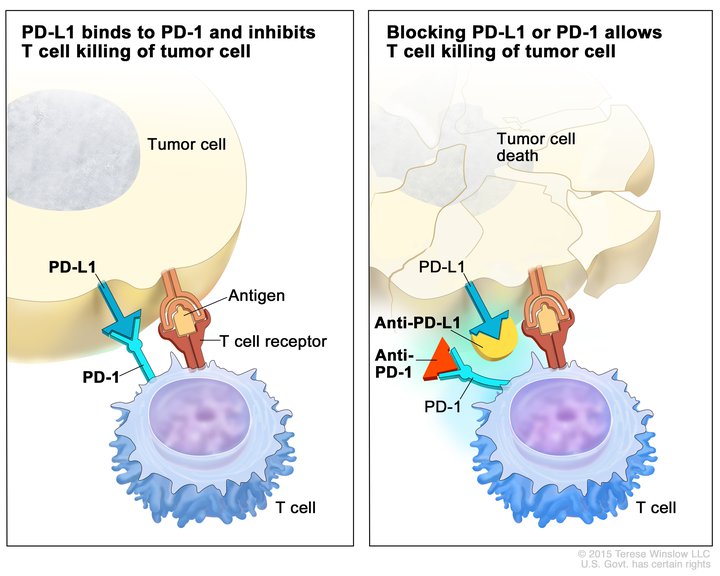 Unfortunately, these drugs are only effective in cancers that have PD-L1 on their surface, and only a few cancer types.  These include bladder cancer, kidney cancer, some forms of lung cancer, and Merkel cell cancer.  But doctors are combining these with other forms of treatment including other immune treatment and chemotherapy.

Although these treatments are not toxic chemicals causing nausea and weakness like standard chemotherapy, they are not without side effects.  The major problem with checkpoint inhibitors is that sometimes they over stimulate the body's immune system to start attacking itself.  The result is similar to an autoimmune disease. This could include any organ system, but most commonly the bowel and the skin, but any organ system can be attacked, including endocrine system, the liver, and the lungs. Occasionally these side effects are severe, but usually they can be treated, and they are almost always reversible.

From an oncologist's perspective, it's wonderful to have new, effective treatments to offer hope to cancer patients!