Why do you have to wait two weeks for immunity to develop after you get your second shot?

You just received your second vaccination shot and a little card that has the dates and type of vaccine you received. You are ready to enjoy life again! Then they tell you that you have to wait two to three weeks before you are immune. Why is that?

It might help you to understand if you know how your body makes antibodies. As you can see in the diagram show here, it’s a complicated system. 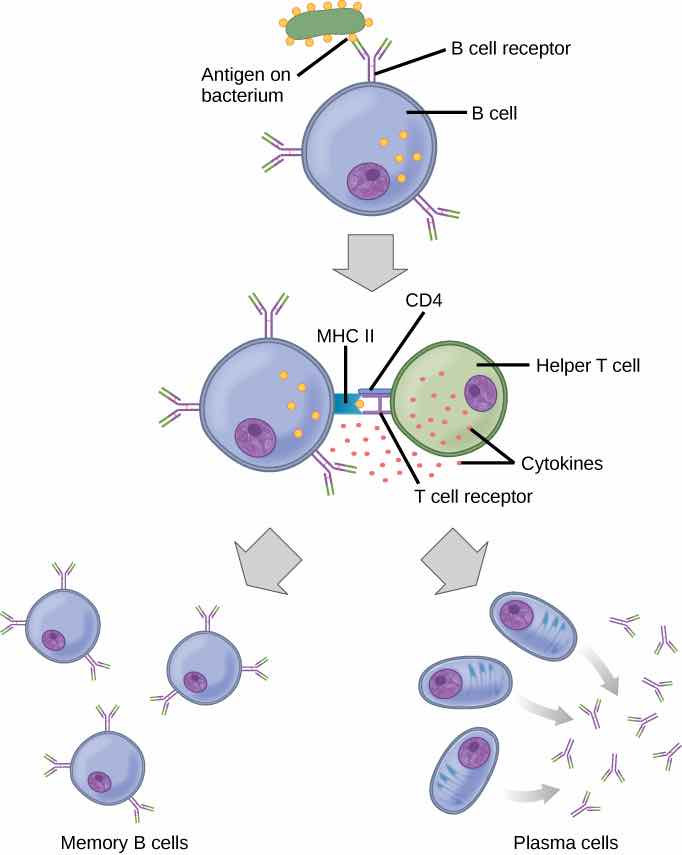 The reason is that there are many checks and balances that keep the body from over- or under- reacting. The first thing that happens is that an abnormal molecule, protein, or bacteria (the antigen) is circulating in the blood and is discovered by a B cell, a cell of the immune system which is doing surveillance in the bloodstream. Think of the little molecules on the bacteria's surface as the vaccine--it's the same thing.

The B cell has to determine if this molecule is “self” or “not self,” because you don’t want to make antibodies to yourself. (When that happens a serious illness results). All cells of your body have a distinctive marker, called MHC II; the antigen from the vaccine does not have an MHCII, so the immunity system determines it is a foreign protein and will start the process of making antibodies.

To do this, the B-cell holds shows the antigen to a special cell called a “Helper T Cell.” The Helper T cell takes the antigen and holds it on the surface, along with an MCH marker protein. It the shows this antigen to any number of memory B cell, until it finds as few that make antibodies that can bind to this antigen. (How the Memory B cells generate different kinds of antibodies is a long story, and we will not go into details.) It then stimulates these Memory B cells to come out of rest and start growing. Depending on how much antigen is available, on the antigen properties, and on the person’s immune system, the whole process takes about one week.

The selected Memory B cells increase in number to “store” the memory of the antigen.  These Memory cells will go through the body and rest in the lymph nodes. A few of these B cells turn into “Plasma Cells,” little factories that grind out antibodies. After another 1 – 3 weeks, there will be enough antibodies to achieve immunity.

Immunity will eventually decline unless the Memory B cells are exposed repeated to the antigen.  That is why a booster shot is given, and may need to be repeated yearly.

After a booster shot, the process described above will be much quicker and immunity will be achieved within about 2 weeks.

There is no way to speed up the process. If the booster is given too early, then antigen interference will occur. Doubling the dose may speed up the initial process a little bit, but there is a limited supply and it will be prohibitively expensive as well.

You just have to wait after your vaccine.  But just appreciate how those little factories are churning out your protection!